It's dark all the time lately. I know, December in Minnesota, of course it's dark, but after such a long spring and summer, the dark and cold just seem more imposing than usual. It's got me craving cheese and pasta and all the carby comfort foods.

Wednesday night we were just going to have eggs for dinner, but I got it in my head that I needed baked mac and cheese. Then I remembered that I'd taken bacon out of the freezer to have with the eggs, and thought that bacon is quite possibly the only thing that could make baked mac and cheese better. The result is quite possibly the tastiest thing I've ever made. I didn't follow any specific recipe, just made a basic sauce and added spices to taste. 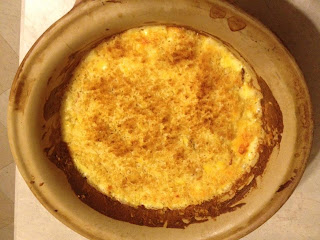 Start your noodles boiling and your bacon cooking. I bake my bacon at around 350 until it's chewy bordering on crispy, but however you like to eat it is where you should

Melt 3 TBS butter in a large pan until it's fully liquid and just a little bubbly. Add the flour and dry mustard and stir constantly (I use a whisk) until it's all incorporated, then let it cook for another minute or so. Gradually add in the milk, whisking constantly until is smooth. Add a pinch (or more) of cayenne along with salt and black pepper to taste and stir slowly and constantly until it starts to thicken up. Stir in whatever cheese you like. I start with about 12 oz, and add more if I think it needs it. This time I used a cheddar jack mix along with a little swiss. Let it get all melty and delicious.

Mix your noodles and cheese sauce in a big baking dish. They will be really saucy, but I've found that it dries quite a bit while baking so I use all the sauce. Cut your bacon into whatever size pieces you like and stir it in. Sprinkle some more cheese over the top. I don't ever measure it, I just sprinkle until it looks like enough.

Melt the last three tablespoons of butter and stir them into 1 cup of panko. Sprinkle it evenly over the top. Bake the whole thing at 350 for 30 minutes, then flip the broiler to low and let it broil for just a couple minutes until the bread crumbs get nice and toasty. Let it sit for a few minutes when you take it out so the cheese can set up just a little. Have a salad with it so you can pretend for a few seconds that you're healthy.

Today we decided on soup, largely because we had ingredients we needed to use up. I saw this recipe for Potato, Cheddar & Bacon Soup a few weeks back and we decided it would be a good meal for a snowstorm. It was. Holy buckets. It was thick and rich and a cup of it made me feel like I was going to burst. I added a little more bacon than the recipe called for, a little extra milk and stock, and added a wedge of butter. After shoveling the driveway (the snow blower won't start) it was perfect for letting our bodies warm up and refuel.
Posted by Tiffany at 4:52 PM No comments:

Other Places to Find Me

Causes I Care About